Without a doubt debt has been very cheap for the past several years. Not to mention record low interest rates and fiscal stimulus have pushed up asset prices following the financial crisis. The stock market has pushed higher and higher as have real estate prices. But so has the debt load of the US Government, the US homeowner as well as college students around the nation. In fact the total US Household Debt has reached $13 trillion, $280 billion higher than in 2008 as the financial crisis unfolded.  We’ve been told that the loans made today are of much higher quality than loans made before the financial crisis. That’s certainly true with mortgages but what about other types of debt? Subprime auto is experiencing heavy losses nearing pre-crisis levels, student loan debt has reached $1.4 trillion with a 11.2% 90-day delinquency rate and credit card balances continued to rise. Mortgages have become the safe form of debt but other forms are becoming very risky. What’s the solution?

As it stands today tax reform likely won’t be passed in its current form. Certainly any type of stimulation to the economy could cure the current debt problems (and potential crisis for students). If nothing is done it’s going to be very difficult to continue to borrow our way into prosperity. And that’s where rates come into play…

If you’ve been watching the market you’ve seen short term rates via the Federal Reserve continue to rise while long term rates have remained relatively flat. See the chart below that represents the spread between the 2yr and 10yr Treasuries. As you can see over the last 8+ years the spread has nearly collapsed, meaning it’s becoming cheaper to borrow over the long term relative to the short term. This is often referred to as a flattening of the yield curve. It’s generally a result of the Federal Reserve raising interest rates and a low growth and inflation outlook for the longer term. Yes there are some supply and demand effects as well. So why care?

As a mortgage banker it certainly is an encouraging sign on the likely long term path of lower interest rates. It also serves as economic encouragement for borrowers to take debt over longer periods of time. If it costs the same to borrow for thirty years versus two years, why not borrow for thirty? And given the equity that has built up over the last several years in real estate, most homeowners have a very effective method to borrow debt versus other forms, especially considering the tax advantage of a home mortgage.

The 10yr is currently at 2.32% versus the average for all of 2017 at 2.32%. The entire range for 2017 has been very tight with it trading between 2.04% and 2.62%. 2018 however could be a very different year with a new Fed Chair (yes Janet Yellen is being replaced by President Trump). We will also see how inflation plays out now that the FOMC has raised twice in 2017 and possibly a third time will come in December. The current odds of a December hike are 92% and a 50% chance of two hikes in 2018. I’m going to call 2018 as a make or break year for the Federal Reserve. They are raising rates, so let’s sit back and see how this plays out. Not to mention a flattening yield curve. If it goes negative (2yr yield is higher than the 10yr yield) then hang onto your hat.* 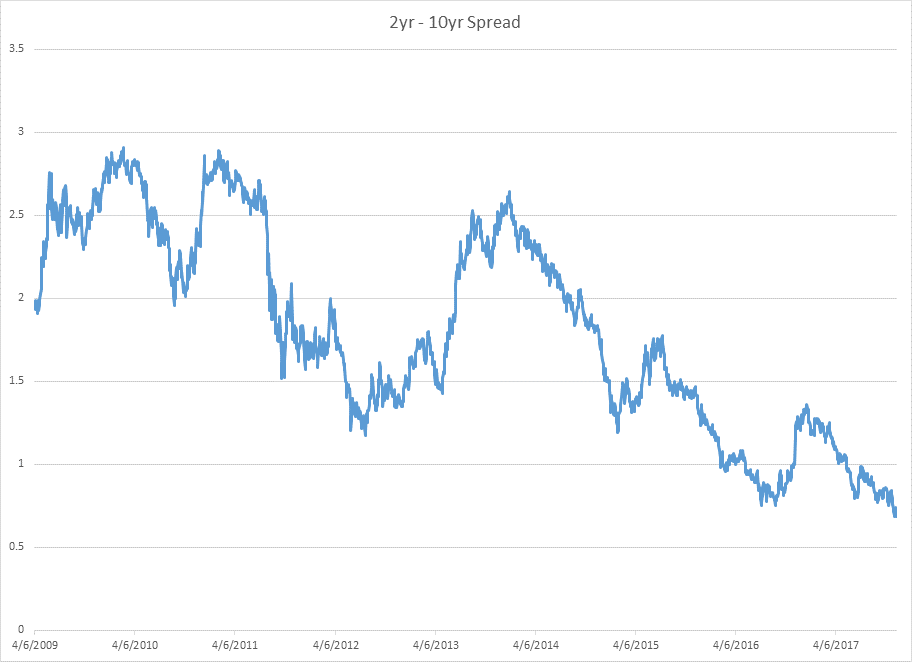